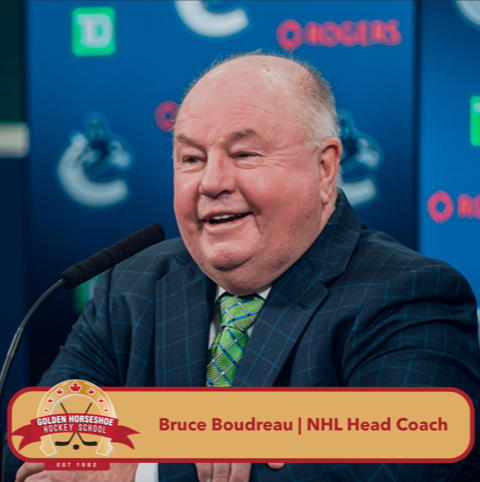 Current head coach of the NHL’s Vancouver Canucks with over 2000 professional games, most notable with the Minnesota Wild of the NHL, after serving as HC to the Anaheim Ducks and Washington Capitals, leading his teams to a divisional title in 8 of the 11 seasons he has been an NHL coach.

As a player, Boudreau played 141 career games in the NHL, amassing 70 points after being selected by the Toronto Maple Leafs in the third round of the 1975 NHL Entry Draft. After a prolific junior career, Boudreau was inducted into the AHL Half of Fame in 2009, ranking 11th all-time in scoring with 316 goals and 799 points.

Bruce’s coaching accolades are abundant, as he began his coaching career in the Colonial Hockey League with Muskegon in 1992-93 and was named the International Hockey League Coach of the Year in 1993-94 with Fort Wayne. He also served as Head Coach and Director of Hockey operations for Mississippi (ECHL) where he won the 1999 Kelly Cup championship before spending 9 seasons as an AHL Head Coach, which included a Calder Cup championship with the Hershey Bears in 2006. Recipient of the 2007-08 Jack Adams Awards for Coach of the Year in the NHL he became the fastest coach to win 200 and 300 games and continues to produce winning seasons regularly. 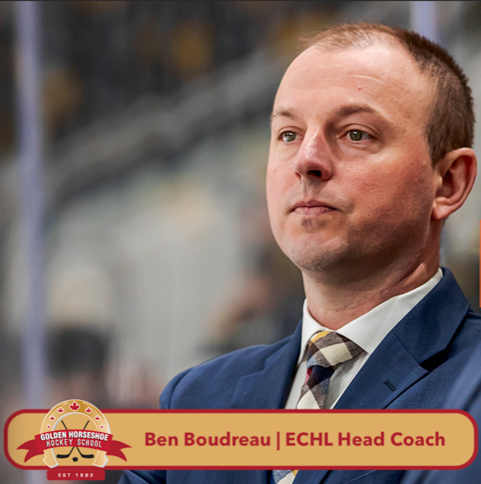 On May 30, 2019, Ben Boudreau was named the head coach of the ECHL Fort Wayne Komets. Boudreau had been an assistant coach in the ECHL the previous four seasons, with the Bakersfield Condors in 2014-15 and the Norfolk Admirals from 2015-2017. Ben joined the Komets as an assistant coach for the 2017-2018 season.

Ben, and the Fort Wayne Komets won the Kelly Cup Championship in 2021. This championship made Bruce, and Ben, the only father-son duo to win the same professional championship trophy in hockey history. Ben was also named runner-up for the Jon Brophy Coach of the Year award.

Prior to stepping behind the bench, the 37-year old St. Catharine’s Ontario local played minor league hockey in North America for parts of three seasons from 2009-2012 in the IHL, ECHL, CHL and SPHL as a 5-foot-10 and 170 pound center. Boudreau concluded his playing career in France the following season before returning home to coach.

Since 1999, he’s been very involved in youth instruction at a few different schools and academies, and continues that role in the offseason running Golden Horseshoe Hockey School with his brother Andy.  Boudreau leads skill development workshops, instruction and team-building for a 16th straight year. In 2011-2012, he also served as the assistant coach for Okanagan Hockey Academy in Penticton, British Columbia, then operated in the same capacity with the Pursuit of Excellence Hockey Academy in Kelowna. 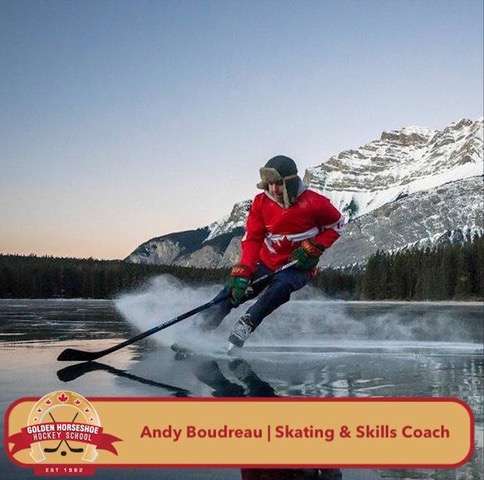 After growing up playing in the St. Catharines minor hockey system, Andy played 3 seasons in the Southern Professional Hockey League (SPHL) for the Mississippi Surge and CIS for Brock University before beginning his off-ice hockey career.

Andy worked with the Brock Women’s hockey team as a strength coach in 2015-2016 before being hired by the Banff Hockey Academy as a player development coach to help run their strength program.

Now spending more time on the ice, Andy teaches skating and skills to children and adults of all ages and skill levels around Alberta’s Bow Valley.

Andy has extensive experience instructing in sports camps and takes great pride in handling the administrative duties for the Golden Horseshoe Hockey School as well as providing Lead Instruction during On ice Skills sessions. 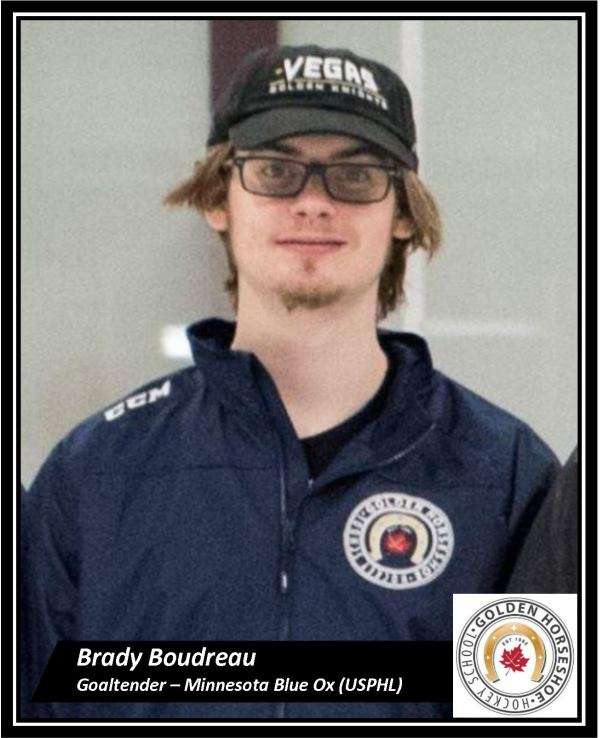 Graduating with a Master’s degree in Sports Management, Brady has also recently interned for the Las Vegas Golden Knights of the NHL.

Attending the Golden Horseshoe Hockey School since three years-old, Brady has been an instructor for the past 5 years, learning from his Dad, Ben and Andy and looks forward to giving back every summer! 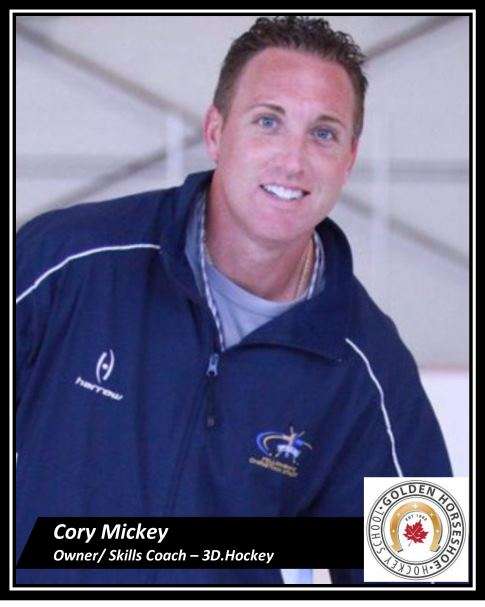 Cory Mickey joins the GHHS for a fifth summer in 2020 as a lead Power Skating and On ice Skills instructor. Owner of 3D.Hockey, Cory graduated in 2005 from Southern New Hampshire University with a Bachelor’s degree in Sports Management, where he played Division II hockey and lacrosse. After college, Cory played two seasons of professional hockey in the NEHL for the Mohawk Valley Ice Cats and Norfolk Ice Cats in Simcoe, ON. before returning to Western New York.

Cory brings a lot of energy to each one of his ice sessions and maintains a teaching style with precise demonstrations, positive voice inflections, and on ice accountability.

In addition to his wide-ranging professional experience, Cory excels in community service by offering his time, support and heart to many community groups such as S.A.B.A.H., Erie County FCA, Variety Club of Buffalo and U.S.A. Sled Hockey Buffalo Sabres in 1975 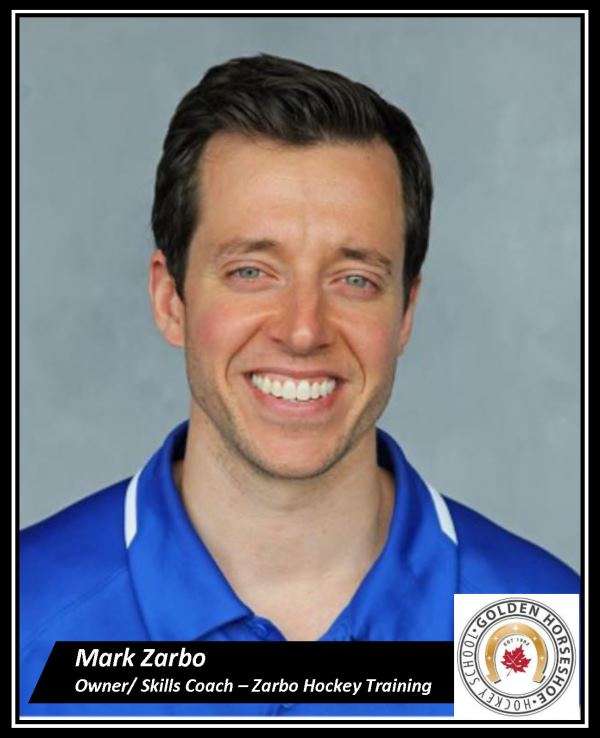 Mark Zarbo joined the Golden Horseshoe coaching staff in 2017 and brings a wealth of hockey knowledge to our camp.  Mark is a former USHL, NAHL, and NCAA Division I player and is currently the owner/skills coach of Mark Zarbo Hockey Training in Buffalo, NY.

Mark started his junior hockey career at the age of 15 playing for the Wheatfield Blades of the Empire Junior B Hockey League.  By his senior year of high school, Zarbo was playing for the Cedar Rapids Rough Riders in the USHL and the Youngstown Phantoms in the NAHL.

After juniors, Mark played NCAA Division 1 hockey at Bentley College for 1 season and 3 seasons at Rensselaer Polytechnic Institute (RPI), where he graduated with a BS in Business and Management in 2010.

As a skills coach Mark is known for being very detailed oriented.  His clinics and camps offer a wide variety of training including the Hockey IQ Program, 3 on 3 Cross-Ice League, Small Group Skill Sessions and Checking Camps.

Away from the rink Mark is a Physical Therapist, graduating from the University of Buffalo in 2014 with his Doctorate in Physical Therapy (DPT), specializing in orthopedic injuries. 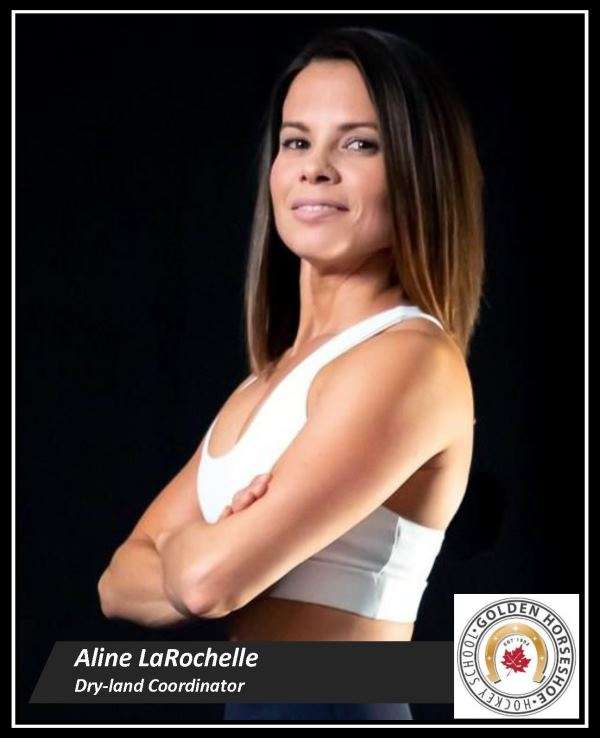 Aline has changed the game for us since joining in 2015 as our Dryland Coordinator. Bringing 15 years of teaching experience as an elementary school teacher with the Limestone District School Board and a lifetime commitment to health and fitness, Aline has extensive experience coaching a variety of elementary level sports teams.

LaRochelle has developed a passion for promoting mental and physical wellness in children of all ages. In 2011, her students began the Daily Physical Activity Leadership Program. Four years later, LaRochelle’s grant application earned her funding from the Limestone Learning Foundation to finance her mission of furnishing each classroom in her school with child-sized stationary bikes from the Run For Life Sparks Fly Program. These bikes have fostered self-regulation in all children, optimizing learning and mental wellness with research based data that demonstrates the link between movement and learning.

Her continued devotion to active living earned her the 2017 Wess Garrod HEAL Award, in recognition of outstanding commitment to health and wellness of Limestone District School Board’s students and staff. 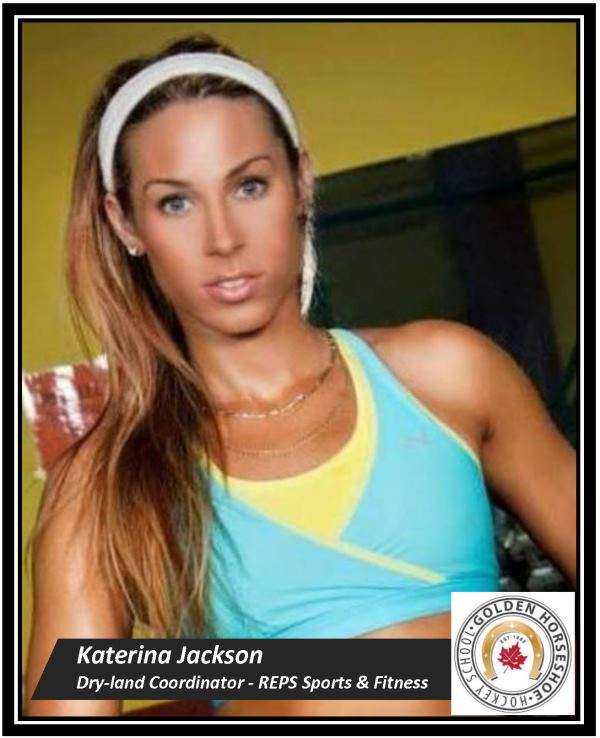 Current owner of REPS Sports & Fitness Training, Katerina joined the Golden Horseshoe Hockey School in 2019 to help with our off ice activity instruction. Katerina’s business was recently named the “Best Place to Get Fit” in St.Thomas, as she helped over 1000 people reach their fitness goals — including many young athletes. 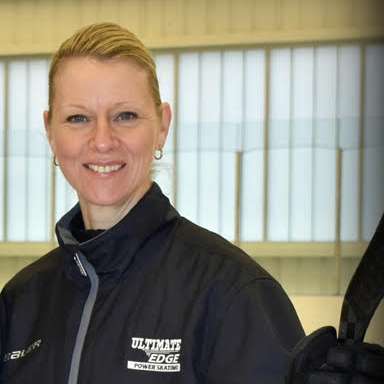 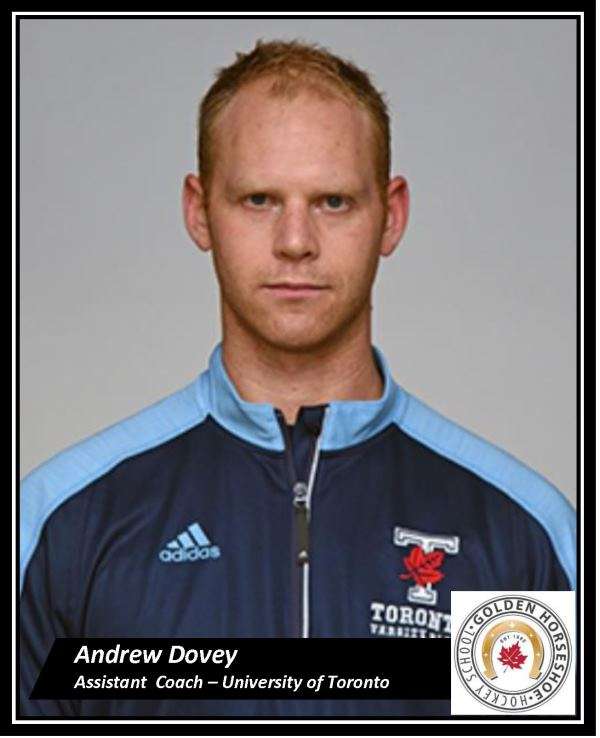 Golden Horseshoe Hockey School coach Andrew Dovey was hired as a full-time assistant coach at the University of Toronto in August, 2017.  Previously, he spent two seasons as a graduate assistant with the NCAA Division 1 Canisius College Golden Griffins in Buffalo, NY.

Dovey completed a Master’s of Science in Health and Human Performance while at Canisius College after completing his undergraduate studies playing for the Adrian College Bulldogs in Michigan. While at Adrian College, Dovey captained the team for his final two seasons, winning four league championships and two playoff title from 2009-13.

After graduating, Andrew played one season for the Knoxville Ice Bears of the Southern Professional Hockey League (SPHL), notching 11 points in 34 regular season games. Dovey then returned to the Bulldogs the following season, serving as an assistant coach and helping the team to a first-place finish in the NCHA with a 16-1-1 record in 2014-15. 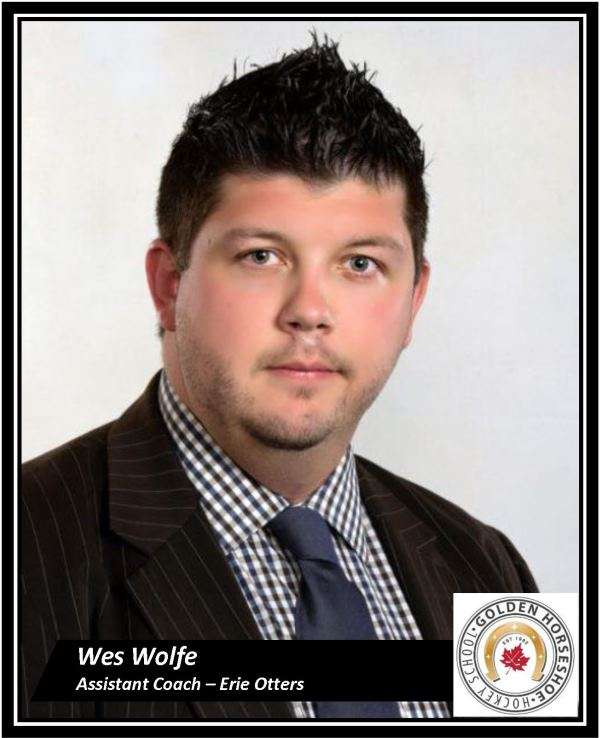 Niagara Falls native Wes Wolfe enters his fifth season as an assistant coach with the Erie Otters (OHL) in 2020-2021.  Wes has already built an impressive resume early in his coaching career, including an OHL Championship in his first year in the OHL in 2017.

Before moving to Erie, in 2015-2016 Wolfe served as head coach and assistant general manager of the St. Catharines Falcons of the GOJHL, where he led the team to a second-place record of 33-12-5 in the regular season and a Golden Horseshoe Conference Final berth.

Wes also has a background in analytical data systems after working for Stathletes Inc. doing comprehensive video and hockey analytics for NHL, NCAA and Major Junior teams across North America. He is a Hockey Canada High Performance 1 trained coach and brings passion, enthusiasm and positivity to the game every day. 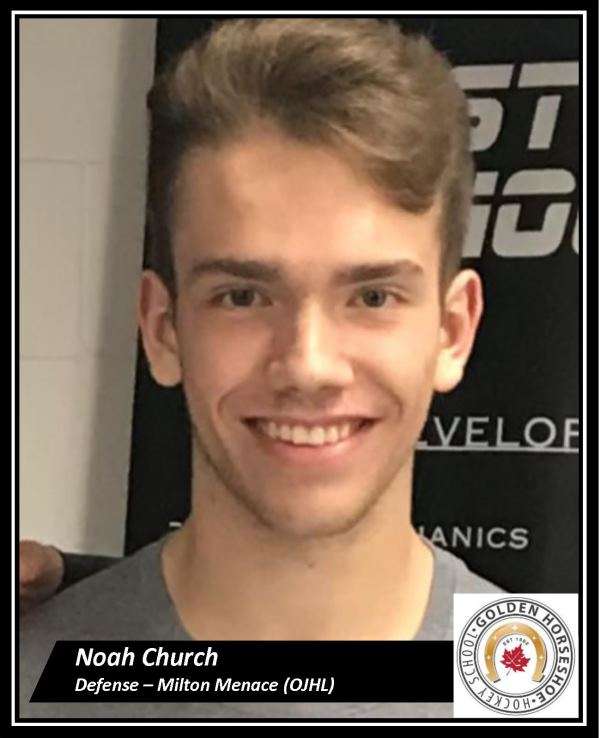 Former student Noah Church is back for a third year with the Golden Horseshoe Hockey School as an assistant instructor. Noah will be playing for the OJHL Junior A Milton Menace for the 2019 -2020 season. For 2018-2019, playing for the Greater Ontario Junior Hockey League‘s Brampton Bombers, Noah was awarded his teams best defensemen and was invited to London Knights rookie and Main Camps.

Noah played his Midget AAA hockey for the local Southern Tier Admirals and played in the Greater Toronto Hockey League in his Minor Midget Year, which he was nominated for the Alex Shapiro Memorial Award; which is awarded to a player that demonstrates a team first attitude and strong leadership on and off the ice. 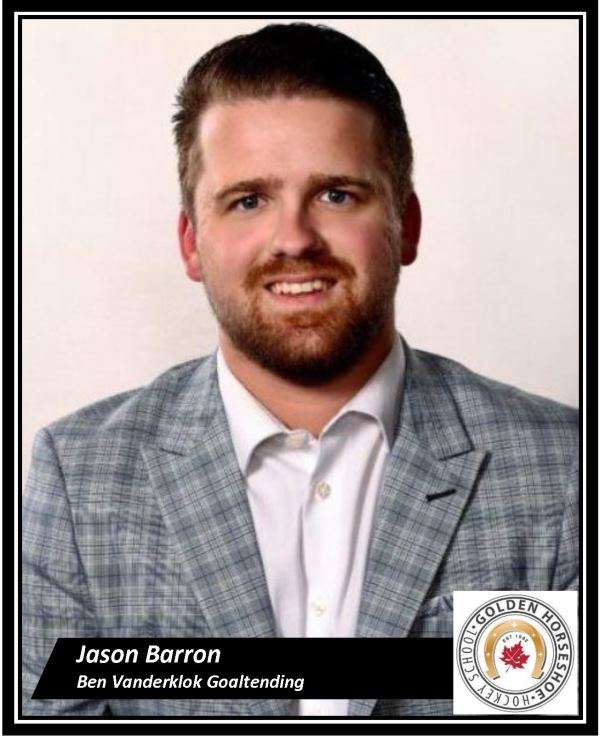 Born & raised in St. Catharines, Ontario, Jason grew up as a goaltender in the Niagara region before graduating into the coaching ranks as a lifelong student of the game. A graduate of the Brock University Sports Management Program, Jason currently works with Ben Vanderklok Goaltending where he has spent the past 12 years, and Head Instructor & Regional Coordinator of the program for the last 6.

In addition to his work with BVG, Jason is a Player Development Associate, working with goaltenders in the Erie Otters organization of the Ontario Hockey League (OHL), while also currently the Goalie Coach & Hockey Operations Coordinator with the Ridley College Prep Hockey Program.

Prior to coaching with the Otters & at Ridley College, Jason coached in the Greater Ontario Junior Hockey League (GOJHL Jr. B) & the Niagara North AAA hockey program.